Jasmine: What I'm looking forward to in IWWL

I'm looking forward to taking a lot of photos, having fun, and making lots of new friends. Even though I have been doing IWWL for three years, each and every year I meet new people and make good friends. IWWL is the best time I have during the summer.
Posted by Waterfront Writer at 3:48 PM 1 comment:

Zac: What I'm looking forward to about IWWL

During this year of IWWL, the thing that I am most looking foward to is the week of exhibition preparation. I enjoy that week the most, because I absolutely love to design and create things. Since I personally work better under stress, knowing that lots of people will see our exhibit forces me to work harder and do my best.
Posted by Waterfront Writer at 3:44 PM 1 comment:

Today was the first day of Investigating Where We Live. I think I can speak for all the staff when I saw we were very happy with how well the first day went, and excited that we got to meet all of the students. We are looking forward to working with everyone!

For our first day we had a "tourist theme". As we explore our neighborhoods, we need to think like tourists. We need to be inquestive, take lots of pictures, and be ready to learn about what we see. Also, mostly tourists will be seeing our exhibit once it is completed, so we need to keep our audience in mind. To convey this idea to the students all of the staff decided to dress up like tourists. We wore "I love DC Shirts" and Jamee had a snazzy red visor. We even wore the classic fanny packs! 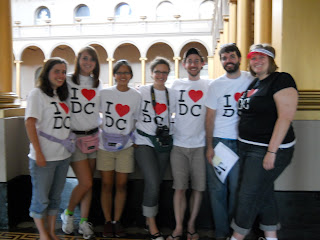 Thanks for a great first day everyone!
Posted by Waterfront Writer at 3:26 PM No comments:

Hey!! My name is Sarah-Guyton Runnels, and I am an intern with Investigating Where We Live. I was born and raised in a small, southern town in Mississippi. When I was a senior in high school, my family moved to Kansas City, Missouri. I am currently a senior at the University of South Carolina in Columbia studying Visual Communications and Hospitality, Restaurant, Tourism Management. I plan to pursue a career in photography and design. This is my first time ever living in a big city, and I am quickly learning my way around. The metro and I recently became friends and I am determined to keep this relationship strong. HA!

When Breck and I visited Petworth I was really surprised how quiet it was. This area really is a "porch community." There are literally hundreds of porch homes where the people of this community can sit and take in this amazing area. The colorful flowers, birds chirping, children playing, and beautiful homes really makes this a hidden treasure within DC. I can't wait to further explore this area with my team!

I am looking forward to meeting all of you!!

Hey there, my name is Breck Furnas and I am the Team Leader for the Petworth group. I moved back to D.C. last December, having left for Chicago in 2005, and I'm constantly amazed at how quickly the city is changing. In the not so distant past, Petworth was not on the map of places to visit. I honestly was not sure what to expect on my first foray into perusing Petworth. Maybe I would find a neighborhood exclusively composed of older homes? Would there be very many businesses? What was the seemingly isolated Rock Creek Cemetery, dating back from 1719, going to be like?

My first and second visits answered some of these questions for me. I was fairly shocked to walk out of the Metro to find large-scale condos and new construction work going on along Georgia Avenue. While walking up Georgia Ave, I found a handful of restaurants, shops, and the lovely Qualia cafe (highly recommend the coffee!). The area along Georgia felt very much in transistion. There seemed to be some businesses closing down, some very old, and some that had just opened. Heading east deeper into the neighborhood, I was struck by how quiet it was: no traffic on the residential streets, few people on the ubiquitous porches that are apart of nearly every home, and only a small number of young people. The quiet allowed me to focus on the beautiful and often historic architecture: 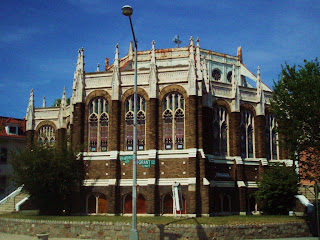 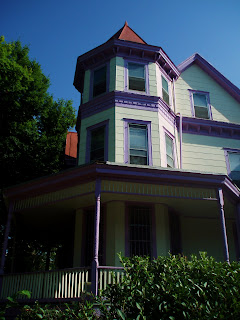 It was also hot, hot, hot. For everyone on all teams - be sure to bring your water bottle! 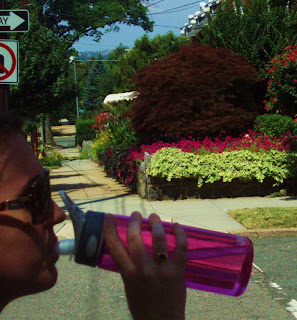 Some thoughts on Southwest Waterfront...

I have visited SW Waterfront three times now, and each time I find something new that greatly interests me. The neighorhood is truly diverse. Located right on the Potomac, SW Waterfront has beautiful views of the water. A thriving marina and houseboat community is located right off shore. Walk into the community a little further, and it becomes entirley different. Shady tree lined streets are filled with wonderful examples of mid-century modern architecture. Lauren and I found a rowhouse complex called River Park that is decorated with aluminum trim, and towering apartment buildings with funky facades. The east side of the community is steeped in history. On our last visit we found Randall Jr. High, where Marvin Gaye attended. Now vacant, there are plans to develop it as a hotel/art gallery. Syphax school, operated from 1902 to 1994, has been remodeled as condos, a great example of the historic preservation technique of rehabilitation and reuse. I can't wait to share what Lauren and I have found with our students.
Posted by Waterfront Writer at 9:09 AM No comments:

Hello! I am Lauren Wilson the Team Leader for the Southwest Waterfront group. I'll be working with the Waterfront Writer, aka Mary Cameron, to lead our group of teens on an exploration of this diverse neighborhood. I led the Columbia Heights team last year, and I am excited to return to IWWL this year.

I grew up in Maryland and have lived in the DC area for 3 years now and this week was the first time I actually walked around the waterfront in SW. It's very quiet, the water is beautiful, and the architecture is rather unique. I'm looking forward to exploring this neighborhood's fascinating history and learning more about future redevelopment plans.

Here are some pictures I've taken this week:

If anyone knows how I can live on a house boat, please let me know.

Mid-morning during the week is a great time to visit the Maine Ave fish market.

Hey there. My name is Vinita and I am one of the interns for Investigating Where We Live. I'm working with team leader Andrew where we will explore Trinidad with the IWWL participants. I am studying Interior Design at Virginia Commonwealth University and have always been curious with how people interact with their environments. When I visited Trinidad with Andrew we saw a lot of residents relaxing on their porches who greeted us back as we passed by. I was also impressed to learn the neighborhood uses gardening as an outlet to beautify and encourage the growth of the community.

As we get closer to the start of the program, I get more and more excited to work with the teens and share the experience of environmental exploration. Now, if only Mother Nature cooperates....

Some of my first shots: 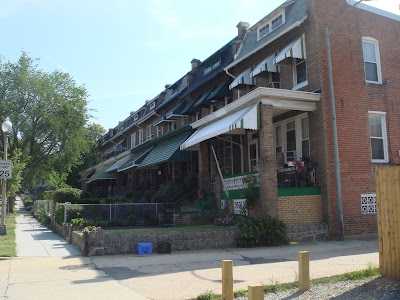 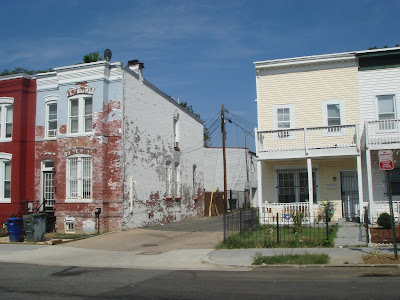 Interesting contrast between these two developments 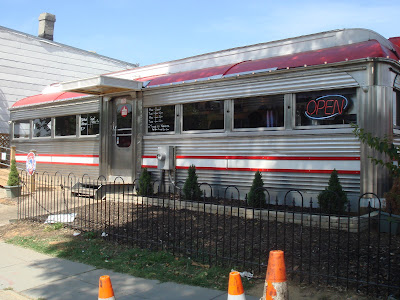 My name is Andrew. I've been a Team Leader for Investigating Where We Live three times now - in Deanwood, in the U Street Corridor, and now in Trinidad. Each summer I learn more about the city I've called home for over four years, and more about how to explore it with a group of teens and middle schoolers. I've enjoyed seeing Trinidad because it has such a great neighborhood feel that I don't necessarily always experience where I live in Columbia Heights. If you live in the neighborhood and see a sweaty group of teens and adults, say hi! 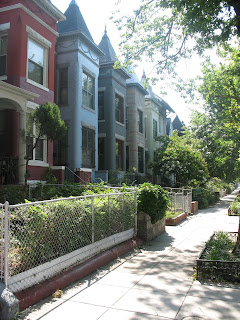 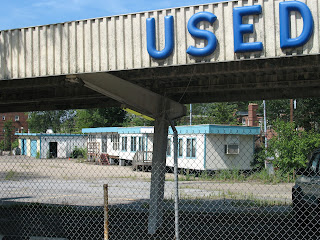 Posted by Andrew at 4:58 PM No comments:

Who is Waterfront Writer?

Hi my name is Mary Cameron aka Waterfront Writer. I am interning with the National Building Museum this summer. During the school year I am a grad student in Art History at American University. I am working with Lauren Wilson on exploring the Southwest Waterfront. We have already visited the neighborhood twice, and I am looking forward to taking the students there.

Here are some pictures I've taken in Southwest so far- 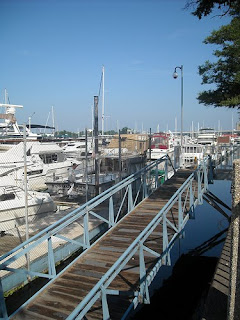 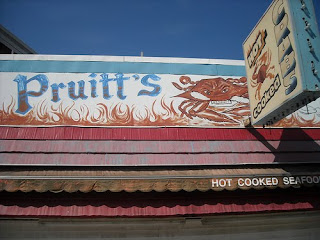 The Evolution of Petworth- Photographic Comparisons

See how Petworth has changed. The color photographs are from Google Map streetview. The black and white photos date from the 1920s, and are courtesy of the Washington, DC Historical Society.

Read more »
Posted by Waterfront Writer at 11:28 AM No comments:

Trinidad is bound by Gallaudet University, Mount Olivet Road, Florida Avenue and Bladensburg Avenue. The community consists of 700 two-story, brick row houses with porches, including about 350 government-subsidized houses and apartments located in the eastern section of the neighborhood.[1] Trinidad is located in Ward 5, and is represented by Harry Thomas, Jr. The neighborhood was primarily a residential community until the mid 1970s, when a commercial development boom created a hodgepodge of retail stores, used car lots and waste facilities.

Read more »
Posted by Waterfront Writer at 4:08 PM No comments:

An Introduction to Petworth

Petworth is a residential neighborhood in the Northwest quadrant of Washington, D.C. It is bounded by Georgia Avenue to the West, North Capitol Street to the East, Rock Creek Church to the South, and Kennedy Street NW to the north (see map). The neighborhood is primarily residential, with a mix of townhouses and single-family homes. Petworth is part of Ward 4, which is represented in the D.C. Council by Muriel Bowser. According to Muriel Browser’s website, residents describe Petworth as a charming and historical neighborhood with great neighborhood attractions, such as the Petworth Library and the Petworth Recreation Center. One resident describes the neighborhood as a “a typical Ward 4 community that is slowly developing into a diverse neighborhood. Young families are frequently spotted strolling through the neighborhood visiting each other or eating dinner at a local restaurant.”Another resident explains, “In downtown Petworth, [visitors] will find a neighborhood under construction and revitalization, making lots of changes for the better, making things look cleaner and newer. In Petworth north of the Metro, they will find a very friendly neighborhood, increasingly diverse, where residents are proud.” This secure and stable community is quickly becoming one of the most popular in the Ward thanks to its combination of urban access and neighborhood feel. Over $380 million is being invested in new development around the metro station over the next several years, including more than 1,000 residential units and nearly 80,000 square feet of new retail opportunities.[1]

Read more »
Posted by Waterfront Writer at 3:52 PM No comments:

Hello, and thank you for stopping by the IWWL Blog. The 2010 program will begin June 29th. In the meantime, we are going to provide some background on the three neighborhoods we are exploring this year- Petworth, Trinidad, and Southwest Waterfront.
Posted by Waterfront Writer at 3:43 PM No comments: